First News is launching a campaign to warn schoolchildren about the dangers of crossing roads while using phones. The campaign is called Look Up! 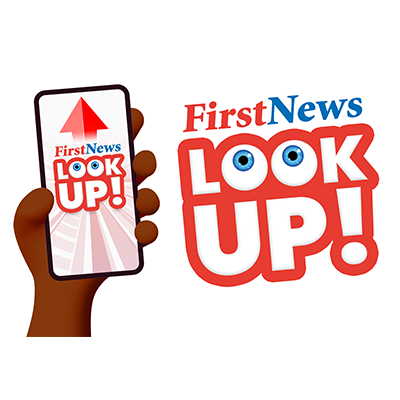 Although many people are distracted by mobile phones, children are the most affected. By the age of 12, nearly all children have a phone and there is a clear link between the use of mobile devices and the time of serious accidents involving children, particularly at the end of the school day.

THE NUMBERS ARE SHOCKING

The Covid-19 lockdown and school closures mean the road safety figures for 2020 were affected that year. But, in 2019, 6,200 pedestrians were killed or had life-changing injuries on UK roads. More than one in five of those people (1,415) were aged 17 or under – that’s around a whole class of schoolchildren EVERY week. Accident data shows those aged 11 to 14 are the most likely to be killed or badly hurt – around 50 EVERY month.

“1,200 children are injured every month in traffic-related collisions that happen within 500m of a school. And, almost half of the accidents happen on the road between 3pm and 6pm, as children are travelling home from school.”
RoSPA (Royal Society for the Prevention of Accidents)

Different studies over a number of years have shown that phones are a growing cause of distraction for pedestrians, affecting whether they cross a road safely. There’s even a name for people distracted by phones: SMOMBIES (from smartphones plus zombies).

A study by the University of Lincoln in 2019 looked at mobile phone use by schoolchildren while crossing the road. They watched pupils outside a secondary school in the north of England over a four-week period. They wanted to see if the pupils looked (or didn’t look) left and right before crossing the road, whether they crossed when the pedestrian light was on red or green and whether they crossed on the crossing.

The researchers found that nearly a third (31.37%) of road crossings were made by pupils with a phone or other device, and that they looked left and right less frequently when they had them. They concluded that the safety of school-age pedestrians is affected by mobile phones and music players.

Studies in other countries such as Australia, Serbia and the US also found that pedestrians who were talking or texting on a mobile phone looked for traffic less often than others. Some countries and some states in the US have made it against the law to cross a road while using a phone.

Laboratory simulations have also shown that child pedestrians walked slower when talking on a mobile phone, paid less attention to traffic, allowed less time to cross when a car was coming towards them, and had more traffic hits and near misses when using a mobile phone.

The 2019 official road safety numbers showed that children aged 11 and 12 were the most at risk of serious accidents while walking on UK streets. The number of children killed or seriously injured more than doubled from 83 ten-year-olds to 172 11-year-olds – the age many children begin to travel on their own to and from school for the first time. This is also the age by which most children have their own phone to stay in touch with family.

Half of teenagers said they crossed streets while reading a mobile device.
Safe Kids Worldwide (2016 study)

A PROBLEM FOR YEARS

The danger of mobile phone distraction has been known about for many years. As long ago as 2014, insurance firm AXA brought out a safety report which said that a quarter of children admitted they paid more attention to their phones than traffic when crossing roads. With nearly one in five pupils saying they had to cross five or more roads on their school journeys, the dangers are obvious.

The problem seems to have got worse since then. In 2016, research released by Safe Kids Worldwide found that half of teenagers said they crossed streets while reading a mobile device, and an alarming four out of ten admitted to actually being hit or nearly hit by a car, bike or motorbike while walking. The organisation says: “Every hour of every day, a teen is hit or killed while walking. Texting and walking can be fatal. That’s why we’re asking everyone to put phones down when crossing the street.”

HOPING OTHERS LEARN FROM SIAN’S DEATH

A teenager died after walking in front of a bus while distracted by her mobile phone. Sian Ellis, 15, suffered fatal injuries when she was hit by a double-decker bus outside her school in Leicestershire on 28 January 2019. The accident happened shortly after 3:30pm, just metres from the gates of King Edward VII College. Giving evidence at the inquest (official investigation) into her death, PC Stuart Bird, a collision investigator with Leicestershire Police, said CCTV footage taken shortly before the tragedy showed a female matching Sian’s description “walking through the school grounds wearing a scarf around her head and looking down at her mobile phone”. His colleague, Detective Constable John Borlase, said witnesses had told him Sian was looking down at her mobile and was also using headphones. Sian’s devastated family issued a warning to other youngsters about the use of their phones near traffic. “While we have to come to terms with this tragic accident, we must try to help others learn from it and to stress the dangers of the use of mobile phones and the distractions that these can cause when walking by and crossing busy roadways. We see this every day and hope that, if anything good can come from this, it is that other children (and adults) will have learned not to put themselves in similar danger.”

DESIGN THE LOOK UP! CAMPAIGN POSTER

First News is creating a Look Up! assembly for every school in the country to hold after Easter. So, we are creating a free assembly pack for all schools nationwide. Part of that pack will be a Look Up! campaign poster for schools to put up around their buildings as a constant reminder to pupils to look up from their phones while crossing the road. And who better to design the poster than First News readers?

You could win an exciting STABILO stationery bundle for yourself and your classmates. From a splash of colour using Power, Cappi and aquacolor, to helpful revision tools such as BOSS, point 88 and SENSOR, the possibilities are endless!

To enter, create your poster (A4-sized) and send it to us by 11 March, along with your name, age and school details. It can be uploaded at first.news/LookUp, emailed to [email protected] (putting Look Up! in the subject box), or posted to Look Up! competition, First News, 58 Southwark Bridge Road, London, SE1 0AS.

Highly commended posters will be part of a downloadable online gallery.