PM Challenged by Kids on the Climate Crisis

ON Monday (25 October), we took a group of kids from all corners of the UK to Downing Street, for a kids’ climate conference with UK Prime Minister Boris Johnson, ahead of the UN Climate Change Conference, COP26, which starts next week. The questions were amazing, so read on to find out what happened when the PM was put on the spot… 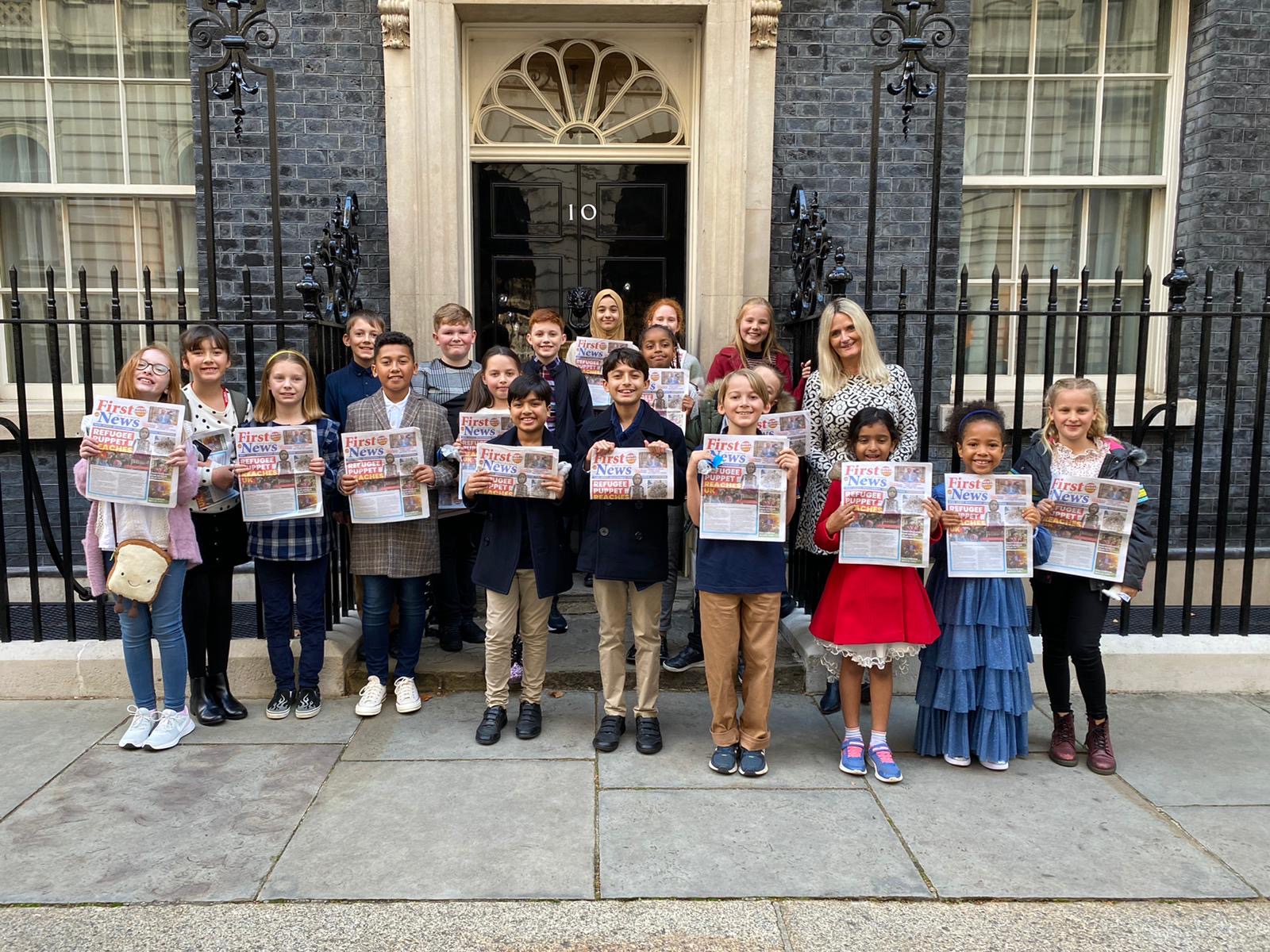 Two weeks ago, First News put out a call to children all across the UK for your climate and environment questions for Boris Johnson, and you sent in loads of great ones. On Monday we went to Downing Street to watch kids put their questions to the PM directly, along with Tanya Steele, the head of environmental charity WWF.

The PM started by saying: “The reason we wanted to get this group in today is because we’ve got an important summit in just a few days’ time; perhaps the most important summit that this country has had in our lifetimes. This is the opportunity for the world to stop climate change from getting out of control.”

Then it was over to the kids…

Alice, Liverpool: When COVID happened, we reacted quickly and treated it as an emergency. Why are we not doing the same for climate change?

PM: I think that’s a very clear criticism of the world,because people don’t think about climate with the same urgency as they do with COVID – and they need to. Scientists were right about COVID and they’re right about climate change, too. But, Alice, I share your alarm about where we need to be. I think world leaders really need to get to grips with it now and the people who are worried are the people in the small island states and the developing world – places like Bangladesh – which face potentially catastrophic flooding as a result of climate change. We’ve got to be urgent on their behalf.

Tanya: The science is telling us that this is an emergency, and we need to take action now, as well as in the future. We know we’ve got lots of innovations, lots of commitments, but what are the actions that  world leaders are taking right now to ensure that we are not putting too much carbon dioxide into the atmosphere?

Lucas, Dundee: I’m from Scotland. Do you think that world leaders are listening to us and do you think COP26 will make a difference?

PM: Lucas, I do think that world leaders are really starting to listen. I think they are starting to see how urgent this is. I’ve talked to a lot of them in the last few weeks and they’re making some good commitments. I think the way it works is that there’s a lot of peer pressure at the summit and I think people feel that they want to follow the example of their friends and neighbours.

Morgan, Cardiff: What can we do to protect our oceans and marine wildlife?

PM: Well, Morgan, we can consecrate huge areas of the ocean and say that you can’t fish in them or you can’t use them for anything other than the protection and conservation of nature. What we want is to ensure that 30% of the seas and oceans of the world are so protected, so they become wildlife reserves, by 2030. You may not know this, but the UK has huge amounts of sea around the Antarctic and the Atlantic. A third of the world’s emperor penguins are British! So, we can protect these marine areas and that’s what we’re doing.

Tanya: Our oceans are like the beating blue heart of our planet in terms of the role they play. Certainly in terms of supporting so much life, but also in terms of drawing down so much carbon from the atmosphere. It’s only healthy oceans that will enable us to do it. We need to protect them and ensure that
some of the regulations are a bit stiffer; there isn’t enough supervision or monitoring of overfishing. We need more action, more legislation and more monitoring of our oceans for the future.

Rahul, Egham: We know that eight million tonnes of plastic pollution is being dropped into the ocean each year. What initiatives are you introducing to reduce plastic use, especially in the food sector?

PM: Plastic is a massive problem and you’ve seen what’s been happening with marine life being choked by plastic, turtles are dying of plastic… it’s turning up in the organs of virtually every marine animal. And plastic is starting to be found within our own organs;microplastics are turning up everywhere. So, we’ve got a real problem with plastics, Rahul. The UK has banned plastic stirrers and straws and we charge for plastic bags, but everyone’s got to learn to use much less plastic, particularly the packaging industry – not just food, but everything. Look at the stuff when you buy clothes; everything’s covered in plastic. We’ve got to move away from that.

Tanya: I think we need to move away from single-use anything and we’re seeing that plastic is clogging our rivers, our seas and we’re seeing some of the pollution that follows, as well. How do we ensure that what we’re consuming isn’t actually adding to that? Do we have some of the recycling processes in place to ensure that we have what we call a ‘circular economy’, that the output of one process becomes the input of the next process? That’s where we need some smart commitments to ensure that we are
starting to have no plastic in nature anywhere in the world.

Olivia, County Down: I am worried about the plastic that gets into the ocean and the animals that get stuck in it and die. What are we going to do to make sure people use less plastic?

PM: The issue with plastic is that recycling isn’t the answer, I’ve got to be honest with you. You’re not going to like this, but it doesn’t begin to address the problem. You can only recycle plastic a couple of times, really. What you’ve got to do is stop the production of plastic. The recycling thing is a red herring. You’re quite right in what you say about the damage to marine wildlife. We’ve all got to cut down on our use of plastic, I think that’s the only answer.

Tanya: I think we have to reduce, we have to reuse, I do think we need to do a little bit of recycling, PM, and have some system to do so.

PM: It doesn’t work. If people think we can recycle our way out of the problem, I think we’ll be making a huge mistake. We need to reduce.

PM: Are you in favour, Tanya, of rewilding parts of the UK?

Tanya: We need to bring nature back! I know some of the young people in this room will know the statistic that 90% of the mass of mammals on this planet is humans, 7% is domestic animals and just 3% is left for wild animals. So, how do we start to rebalance it? I think we could start by rewilding our oceans. Certainly, we need to take our responsibility seriously and help bring nature back, because when you give nature the chance, it regenerates very quickly.

Was the PM right? Watch out for our special report on recycling in next week’s issue! 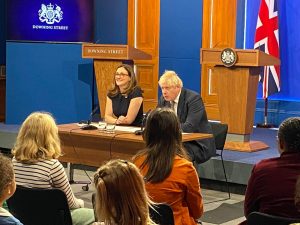 When the PM asked the children for their suggestions about what he should say to other world leaders at COP26, he got some great responses.  Here are just some of them.

“I think you should tell world leaders to stop burning fossil fuels, so there can be a more sustainable and affordable way of getting around and keeping lights on in the house.”

“We need to make sure people understand how dramatically climate change might be affecting other people in other countries.”

“To reduce carbon emissions, all schools should have electric minibuses that pick up and drop off children.”

“Can you tell the world leaders that all schools should have solar panels on their roofs and plant at least two trees?”

“I’d like you and the world leaders to explain how we can make farmers take a look at their land and how they can use it more sustainably.”

“Encourage more people to ride a bike or scoot.”

“I would like you to incentivise industries to become eco-friendly in the materials that they use.” 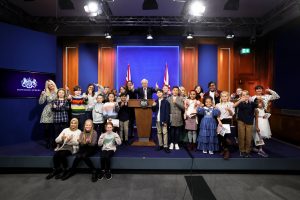