This week, Year 6 students from The Cathedral School of St Saviour & St Mary Overie in Southwark joined First News for a special Zoom interview with Dermot O’Leary to talk about the fifth book in his Toto the Ninja Cat series, Toto the Ninja Cat and the Legend of the Wildcat. Dermot read an extract from the new book before being quizzed by the students 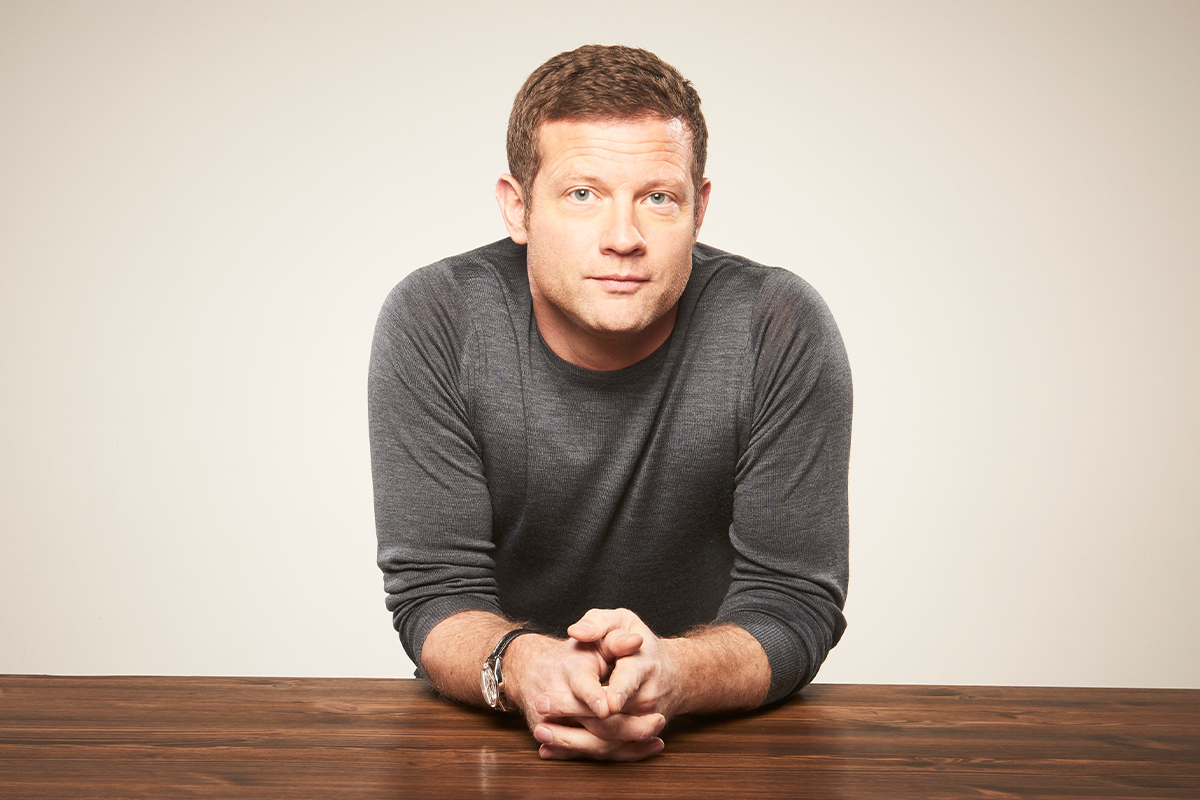 Cecilia: What made you decide to start writing books?

Well, I have always written, ever since I was your age. I remember I’d borrow some of my dad’s paper and I started writing stories, then I would go around the estate I lived on and I would try to sell them for 5p each, so I have always loved writing. Working in television and radio you get to write quite a lot too, mostly scripts and interviews. I had this idea when we first realised that Toto was blind. When we first got her over from Italy she kept bumping into things. We took her to the vet and found out she has about 95% blindness, so she can only see 5% of stuff, which includes breaks in light. If she looks up to the sky and a bird flies over, she can sense something is there. Her reactions are really good and we started calling her a little ninja as a nickname and it kind of stuck. So that is where the idea came from, this story about her world and her actually being a ninja.

Fabian: How long does it take you to write a Toto book?

What I normally do is I tend to sort of start planning the books around November-time, and then if I need to do some research I do that. This one is set in Scotland, so before the pandemic I probably would have gone up to Scotland and looked around a little bit and taken some pictures, just so that I have got a picture in my head of where I want to base the story. Because of the pandemic I couldn’t go this time. The last book, The Mystery Jewel Thief, was set in London, so I went to the Museum of London and I went to the Tower of London, so I got to meet a Beefeater and he showed me around. Then I spent some time up in Hampstead, which is not too far from where I live, because I wanted to base some of the book there.

So the research normally takes a couple of weeks. I never take time off just to write, so I will still do other stuff, like my radio show or the podcast or something. Writing the first draft, which is like the first version, normally takes me about six to eight weeks, writing three or four mornings a week. Then I send it off to my editor to read and make any changes and then they give it back to me to write a second draft, which isn’t rewriting the whole thing, just some changes. I do that about three times until we are both happy with it. The second draft maybe takes a week and then the third draft just a few days, so it’s a long process but it is one I really, really enjoy.

Tallulah: What are the best and worst parts of being an author?

What a great question! The best part is days like today, where you get to meet people who have read the books and they tell you what they like and sometimes what they don’t like! In a strange way, that is when the book comes to life. I also really like writing in the mornings; I like to be creative before lunch because after lunch I get a bit useless. I love those mornings where the house is quite still and I just have a little bit of time on my own to write away. The worst bits are when you get stuck for ideas. What I try to do is plan my book before I start to write it, but I don’t plan in too much detail because I like the idea of seeing where the journey when I’m writing takes me. Say Catface goes off on this adventure and I might write that, but it may not get in the book, but I love the idea of just having that freedom. Every now and again, and it happened on this book a couple of times, you get stuck. You sit and think: “Oh no, this doesn’t make sense,” or the storyline doesn’t work. Those are the worst bits, when you are halfway through a book and you realise something isn’t working and you have to go back to the drawing board. 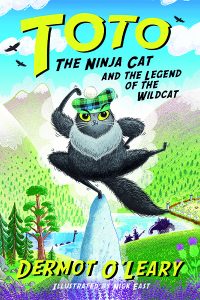 Lyonna: Who or what motivated you to write five brilliant Toto books?

Well, I think I have always wanted to see what else I can do. I’m really lucky to work in TV and radio and I have always tried to be as creative as I can be, but I have been working in TV for a very long time now. When you get the opportunity to do something like this, something new, it is really exciting and the motivation kind of came from there. My wife is a brilliant director and she is very creative. When you are a director you deal with actors all the time, but you also deal with what we call the aesthetic, which is what you see in front of you, what you can see in the picture, and she is very good at that. I’m not so good at that; my creativity is more about writing and creating stories that way. She is also a very good editor; she is good at taking stories and saying what works, what doesn’t and what could be changed up to make it better. I’m very lucky to have two very good editors: my wife and my actual editor, who is a lady called Kate, so I guess that is where my motivation comes from.

Leonna: What has been the highlight of your writing career so far?

I think weirdly, the highlight is actually getting the first books published. I can write it, but if I don’t get a publisher who will put it out there for me and print up the books, then no-one is ever going to read it. I thought I had a good idea in my head but it didn’t necessarily mean I could do this. So I go and see a publisher and I told them the idea. They either don’t like it and that is the end of that or they do like it and they tell you to go away and work on it, work on a few chapters and then come back and they can decide if they want to work on it together. So I did that, and this was in 2015. Then I went back and they said they really liked it and we went on to make the first book. So the highlight in an odd way is just someone believing that I could do it. Then actually getting out there and getting it published and seeing it in book stores and independent bookshops and supermarkets. That is where the joy comes from, knowing that something you have written has actually been published. Then it is all about the next idea, whether it is Toto or something else.

A good friend of mine gave me some good advice: he told me to just write. Put pen to paper, or get on the keyboard and just write your ideas down. Some of them won’t work but some will. There was an ice hockey player called Wayne Gretzky who was like the Ronaldo of the ice hockey world and he gave this great quote. He said: “You miss 100% of the shots you don’t take.” His whole theory was to just go for it, because what is the worst that can happen? You fail? So what? If you fail at one thing you’ll succeed at another, so just keep going. Having that great attitude of just being fearless. I feel very lucky and very privileged that I got a publishing deal. 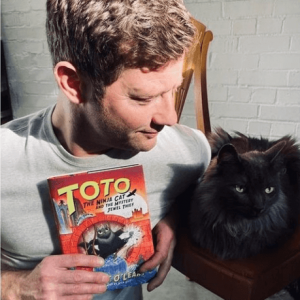 Dermot with the real-life Toto!

Chimamanda: How does it feel knowing that people are reading your books all over the world?

Ah, Chimamanda, it is the best feeling, it really is. It is so rewarding when you meet people who have readyour books. I am very lucky to work in TV and radio because I get to meet a lot of people all the time, but writing is something very different. You shut the door and then you are on your own. On television you get feedback immediately. People will say: “Oh, I saw you on TV,” or “I heard you on the radio.”When I am writing I have absolutely no idea whether you guys are going to like this book or not; I hope you do. The only feedback you get is when you do things like this, or school tours or book festivals when you actually get to meet people who have read the book. When people tell you they have enjoyed your book, it is the best feeling, it really is.

Azaria: Is there an author you particularly like, and why?

There are loads! I really like detective novels and there’s an author called John Connolly and he writes really good stuff for adults. There is another guy, who sadly died a couple of years ago, called Philip Kerr and he wrote really good detective novels and his are based in history, around the Second World War. When I was your age I used to like Roald Dahl. He was probably my favourite author just because there were so many books that he did and because they were all so different. You could always tell he was the author. He was such a brilliant writer and he was quite a naughty writer, which is why I quite liked him, and the kind of writer I wanted to be when I first started writing. Stories that you would enjoy, your mum and dad would enjoy and you would enjoy it together.

Canaan: What does the future hold for Toto and her friends?

Now that is a tough question! So a lot more ninja-ing. I dunno if you’ve read all of this book yet but Archduke Ferdicat pops up, so I think he is definitely going to be Toto’s archenemy and rival. But then again, who knows? Maybe they’ll get on! I have got an idea in my head that may involve Christmas and it may not be 100% Toto, it may involve the other characters as well, but thank you for reminding me: I need to start thinking about that one!

Toto the Ninja Cat and the Legend of the Wildcat is out now!